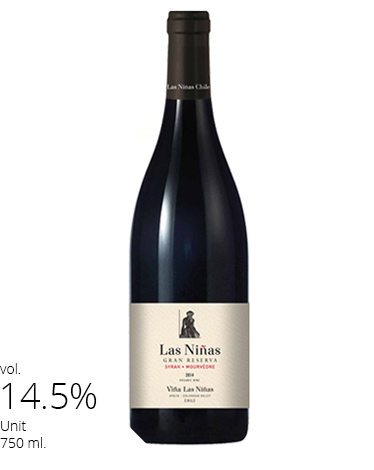 94 out of 100 points and  and Gold medal from Vinales Internationales 2017 year.

In 1996, Bernard Dauré persuaded his friends, Jean Pierre Cayard and Claude Florensa to embark on a crazy idea, to join him in creating a wine estate at Apalta in Chile. The girls from the three families soon fell in love with the land, in the Colchagua Valley, which is only a two hour drive south of Santiago, the country’s capital.

The Las Niñas vineyard has established firm roots in Apalta, and with every day that passes they question the modernity of the wines that are the fruit of this land. Ecological production is a duty and the search for balance is renewed at the wine harvest every year. The freshness of their wines bearing witness to their eternal youth.

To enter our site you must be at least 18 years old.

Yes No
We are sorry, but you are not the correct age to access this site.